How Bad Is The Male Midlife Crisis Problem? 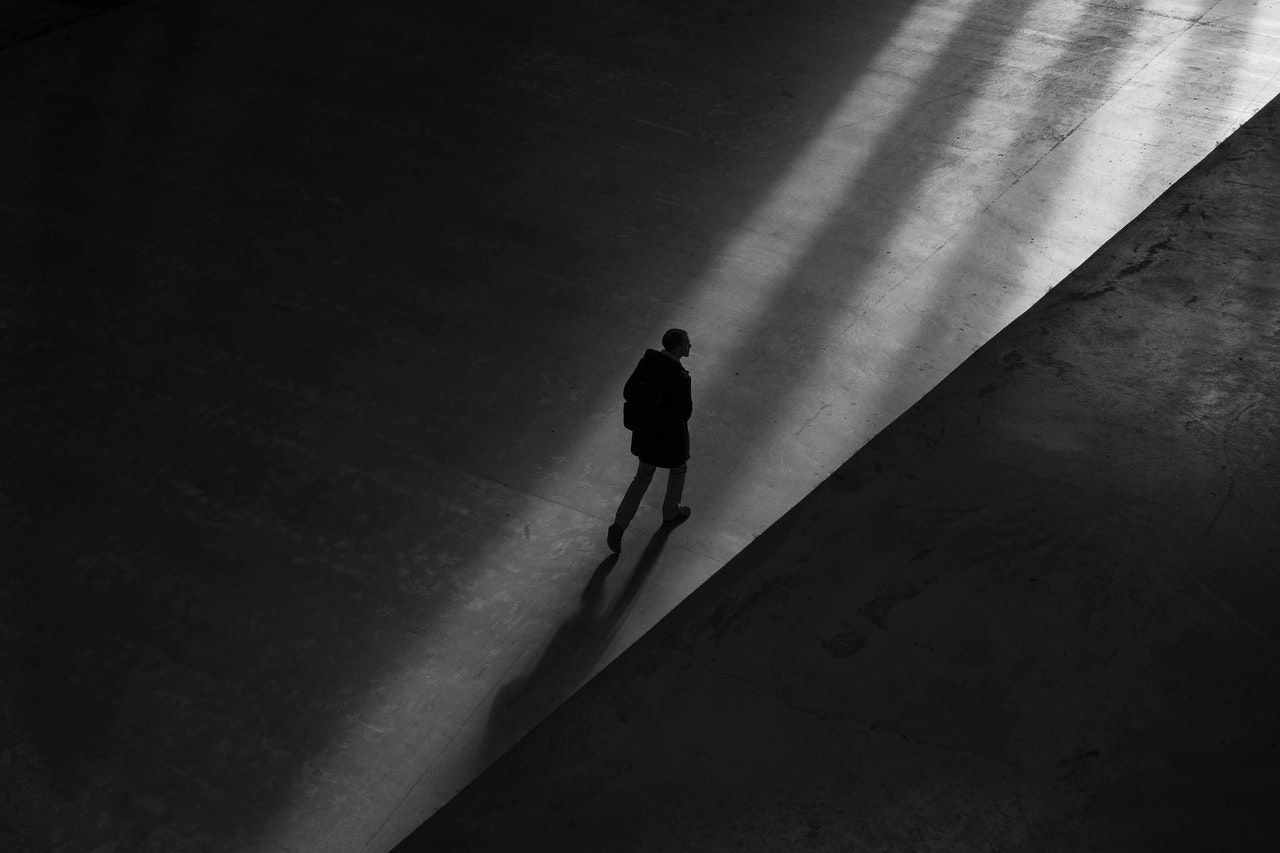 When someone on the street is asked which age group is most at risk from suicide, the majority will say.

Why, because we are always hearing about youth suicide.

Is Midlife Crisis That Much Of A Problem?

It's not very scientific, but when I search in Google Search for "teen suicide" it comes up with 344 million results.  Searching for "midlife suicide"  brings up only 880,000 pages. "Suicide over 40" is a search term that brings up 249 million results, much closer to the "teen suicide" keyword term.  So, its hard to draw any conclusions from this, other than that is a lot of people searching on the topic of suicide every month for just those keywords!

It was back in 2017 when I first wrote about the epidemic of suicide, when I was shocked to see that a recently retired sports star I had admired had killed himself.  His success and the public admiration he commanded meant that at the time, he was one of the last people I would have suspected of doing such a thing.

But he did, and the problems is getting worse.

Looking at the CDC website the picture is much clearer (click the image for the reference).  The following chart is for females: 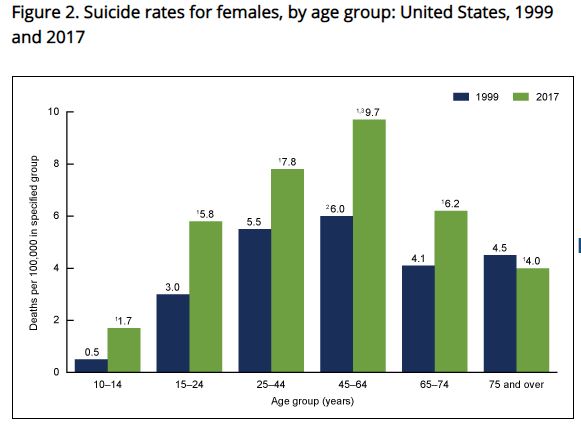 So for females, suicide is worst in midlife, and has grown by an incredible 61% in this age group in the eight years between 1999 and 2017. 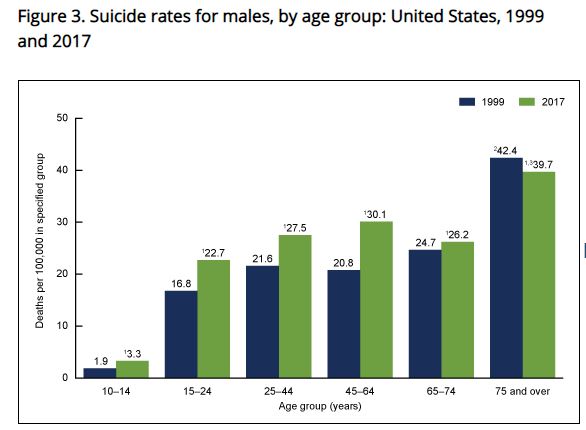 Putting the data together, we have the following chart.  Note, different source (NIMH using CDC data with different groupings), so the figures are slightly different:

This isn't about comparisons, but it is about recognizing that in the western word at least, we have a serious problem with both men and woman in midlife ending their lives.

Tip of The Iceberg

Suicide is of course the tip of the iceberg of a much larger problem.  The reasons for people taking such a drastic action are much debated and are complex combinations of problems - such as marriage breakup, career problems, financial problems, guilt , fear, a loss of hope and loneliness to name a few.

Take just the last of these - loneliness.  A  2010 AARP study showed that a massive 1 in 3 people aged 45 plus are chronically lonely.  When other studies tell us that loneliness is as bad for our health as smoking, it starts to shed some light on at least part of the problem.

John Lennon and Paul McCartney wrote about this over 50 years ago in Eleanor Rigby:

Sadly, we haven't solved it.

If those stats are true, then out of 127 million adults in the USA over 45, that would make more than 45 million chronically lonely people.  This includes men and woman.  I'd bet my front teeth that the rate for men would be far higher, because as a rule, men are far less able to build and maintain deep relationships than woman.

This analysis could go on all day.

I'll leave that to others. My point here was simply to shine the light on how badly men and woman are doing in midlife.

It is a problem.  A serious problem; and it is a midlife crisis for individuals, families, work places, communities and our nations.

What can you do?

If you're one of the millions who is struggling, it starts by acknowledging you have an issue and putting your hand up to talk.

If you are one of the few that is not struggling with a midlife crisis, then

Be available and kind, because we all need friends and to have friends you need to be friendly (see Proverbs 18:24).

If you can choose to be anything, be kind.  It doesn't cost you a thing, and it will probably payoff in wonderful ways that you can't possibly imagine - Guy Mullon

I encourage you to go and be a friend to someone today.

If you have no one to talk to, you can always contact me through my Facebook page, LinkedIn profile, or by connecting through the forms on this website. 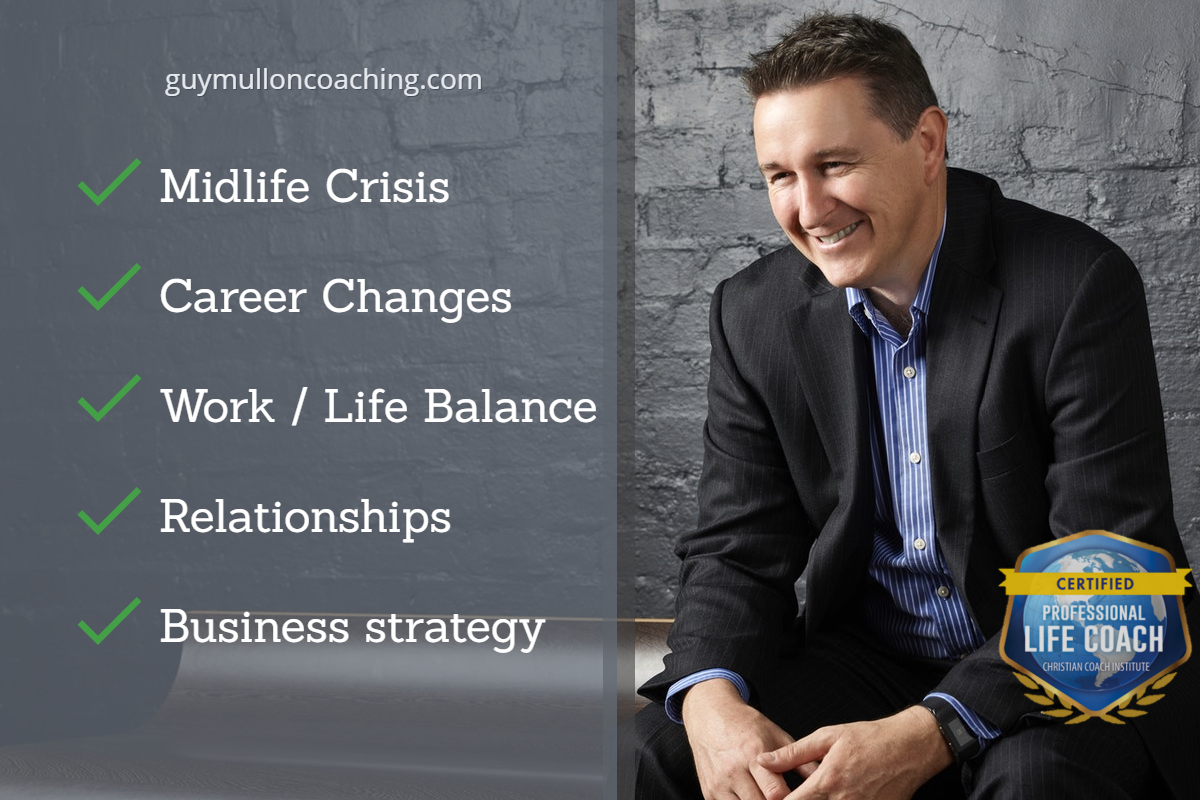 Guy Mullon CPLC, CIV, B.sc.(Hons) was a 20 year veteran of power markets and energy derivatives trading.  After the dust cleared on a career-ended catastrophe, he discovered he had an opportunity to reinvent his career and family life.  Today, he is a certified life & business coach specializing in helping midlifers redesign their work, family and personal life away from what they've been living into what they really want to be and live for the next 20 years.

Contact Guy for a free 'virtual coffee' to discuss the changes you want to make in your life, career or business.

You can also find Guy's contributions in written and podcast forms at realmen247.org